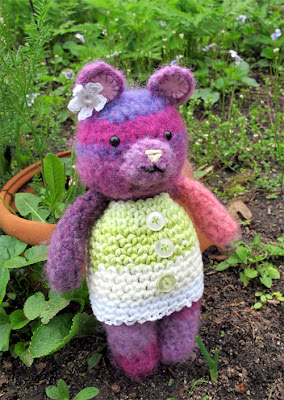 I am pleased to introduce you all to Wednesday's mystery project, Berry Bear!  When I saw some skeins of fluffy variegated yarn in the clearance bin of a craft store, I immediately thought oh! brushed bears!  I've been making amigurumi for a few years now and hadn't tried a bear yet, and I've always admired the ones people make (mainly from wool, which would probably work much better) from fluffy yarn and then brush to fluff up said yarn like fur. 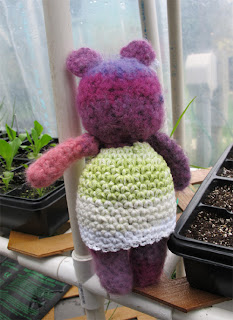 I found the perfect free pattern, which I modified a little---surprisingly, not by making it smaller, hah!  I decided to try a different look for the ears, and the arms are a bit wonky because uh, I tried to frog one and the yarn broke, so I thought okay, nevermind, I'll just try to make the second one look like the first one.  Which worked out okay, somehow.  I knew the yarn's fluffitude would make it annoying to work with, so I was at least a little prepared for that. Not having a wire pet brush (which is what I gather is usually used to fluff your bear), I used a little plastic My Little Pony hairbrush, which was fun and ridiculous.  I also added tiny ruffle trim to the dress, which helped me improve my tension working with smaller yarn/hooks.  (Read as: it was really annoying.)

Yarn difficulties aside, I loved working this pattern, especially the little dress, which I did in cotton because I wanted it to have a completely different texture and look from the bear itself.  I'm already dreaming of more bears---although perhaps not more brushed ones---mainly because I want to play with colour/fiber combinations between bear and dress.  I think the next bear is going to be a sort of periwinkle blue... 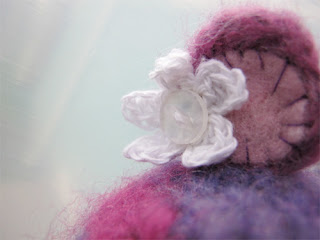 I also couldn't resist giving her a tiny button-center flower for her ear, and to add a little pop of contrast to her head.  This is one of the more traditional amis I've made, and I'm quite fond of her.  I may list her in my sadly-neglected online shops eventually. 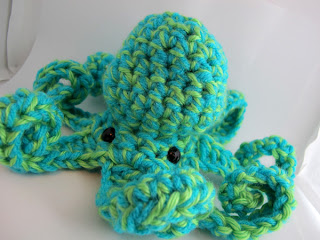 Since you all made this octopus blush with your nice comments about him, I figured I'd try and snap a (slightly---ugh, grey days.) better photo of him and share some details about his creation.

Back in June or July, I was googling for images of octopuses and ended up stumbling upon this Squidoo tutorial, and got addicted.  The basic construction, in which you crochet the tentacles (which get their great natural curl from a combination of single and half-double crochet stitches) and then join them into a ring and make the body in the round, is simple and endlessly adaptable. (E.g. tentacow & tentacat.)The first-ever one I made was the only one I followed the pattern exactly for, after that I started experimenting with tentacle length and the increases and decreases for the  head/body.  Each yarn or combination of yarns will work up differently, and it's so much fun to play around with. I definitely recommend giving the pattern a try and making a tentacle-friend of your own! 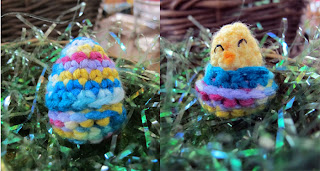 And one more tiny finished thing, Bitsy the Ridiculous Easter Chick, who I made up on Saturday night just in time to tuck into an Easter basket.  I used a pattern from Ana Paula Rimoli's fabulous Amigurumi World (the book from which I learned to make amis!) and made it in half-size, so Bitsy and her egg are a little under two inches tall.

Go see what everyone else is up to at FO Friday and Fibers on Friday! :)
Posted by Kathleen at 10:31 AM